Waterfront property with panoramic views across the ocean (May 2016) 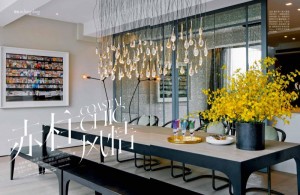 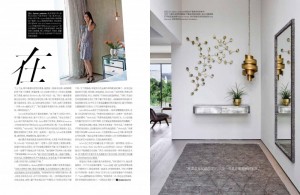 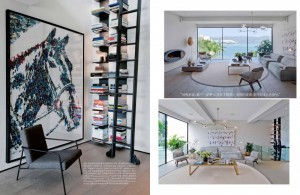 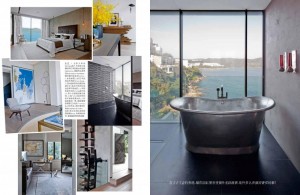 Living in a waterfront property with panoramic views across the ocean is something very special – and especially so in Hong Kong, where space and privacy are highly sought after. Sylvie Lambotte’s four-storey coastal townhouse on the Southside of Hong Kong Island is a perfect example of outdoor-indoor synergy, with its stunning hilltop location and stylish interior palette.

Sylvie grew up in Italy, but moved to Hong Kong from the UK 6 years ago. She shares her home with her husband Federico and their 5 children (ranging in age from 6 to 19). “We have always lived in Stanley. Before, we were renting the house next door and fell in love with the area. It is lovely to look at the sea, it feels very private here.” When the chance came to buy her current home, she jumped at it. “We were the first ones to view it. You have to be fast in Hong Kong as waterfront properties go very quickly.”

She smiles as she recalls its original state. “These houses were built in the 1960s. The guy who built them lived in Miami and it was all pink and the inside was horrible with very small windows.” But there was clearly lots of potential and Sylvie sprung into action, bringing in UK-based interior designer, and friend, Michela Imperiali of MIK Interiors to work on the project. The two have a long history together. “Sylvie and I have been close friends for many years now,” explains Michela. “We are very similar (both in taste and personality) making the whole process faster and easier.”

Michela says the progress was collaborative. “We conceived it together; we talked and discussed it and eventually everything came together. Sylvie is an enthusiastic person and she likes to explore. And she trusts people!”

First they considered the existing natural light and the climatic conditions, especially the fact that strong typhoon winds were likely to buffet the house from time to time. Says Sylvie: “For me it was very important to have these large windows, because of the view and to get as much light as possible into the house. Our exposure is good, but it’s not the best for lighting so I had to get as much light in as possible.”

So they replaced the small windows with floor-to-ceiling windows along the coastal side. Says Michela. “The window profile is very important as every window in the house is a piece of art. But I had to deal with possible typhoons and study wind speed. We actually ended up importing the frameless windows from Australia because we could not find what we needed in Hong Kong.”

When it came to the spatial arrangement, Michela opted for fluid spaces with distinct focal points to help create a functional family home. “How the spaces communicate with one another makes a house friendly. This can sometimes be a difficult task in a townhouse as often the spaces are constrained.”

Sylvie’s four-storey home was thus divided into functions per floor: on the top a mastersuite and office; the children’s rooms on the next floor down, a reception area and formal living room below that; and a family friendly lower floor which houses the kitchen, dining area and TV zone plus an outdoor terrace which spills down the hillside.

For additional connectivity, a metal bookcase and ladder in the family room rise upwards through a cutout in the ceiling into the living room upstairs. Says Michela, “I wanted to enhance communication between the two floors yet the space was limited. So I used a very tall library-like device which can be accessed from both floors.” Adds Sylvie: “Ideally I would have liked the reception and the dining room to be all on one floor. We could not achieve this so this cutout idea was our way of connecting the two spaces.”

Similarly, the idea of flexible space is employed downstairs between the dining and kitchen-TV zone. A 4-panel mirrored screen can overlap to leave an open space or be spread out to create a closed space for formal dinners. Antique mirrors have been added to the panels on the dining room side which both reflect the light and at the same time ensure people’s reflections are muted. “Whilst you are eating you don’t see a clear reflection of yourself, which could be disturbing to some,” says Michela.

Decoratively, Sylvie and Michela have used glamorous textures, sculptural furnishings, bespoke craft pieces and contemporary artworks through the space. “I love textures and in every project I always like to use some ‘statement pieces’, something that only the client has and noone else,” says Michela. The sculptural lighting fixtures from Lindsay Adelman, Porta Romana and Ochre are talking points. “I like lighting to either disappear or be a statement. In the case of the wall branch at the entrance or the dining room chandelier they don’t look like light fittings … they are more like sculptures.”

The furnishings have been carefully chosen and many function as art pieces in themselves. “I really like to combine pieces and I source from around the world,” says Michela. “I like to use Italian brands like Catellani & Smith which has a craftsmanship feeling or Baxter with whom I work with very often.” She also mixed in vintage pieces and briefed Hong Kong artisans to create pieces to her own design.

The final piece of the interior jigsaw is Sylvie’s art collection which has been put together over time, It includes works by Liu Bolin, Vic Muniz, Shirin Ashat and Thomas Ruff. Michela stresses that the house was not designed around the artworks. “You always find a place for a beautiful piece of art. I don’t like to have an interior that has been designed specifically to match a certain piece of art, I believe an art collection should go with any interior.”

And as beautiful as this home is, it is clear that it is very much a family home. “We love the outdoors. In Hong Kong to have this it is such a luxury,” says Sylvie. As a family they mostly gather often downstairs, opening up the terrace doors to enjoy the sea breeze and gathering around the table for mealtimes or to play games. “We don’t need a table outside as the doors open up and you feel as if you are outside anyway.”

And she gives her designer friend the best credit ever. “I don’t think there is anything I would do differently. We all enjoy this home very much. I love this dining table and the chandelier. I love to sit on the terrace and have drinks. It is wonderful.”